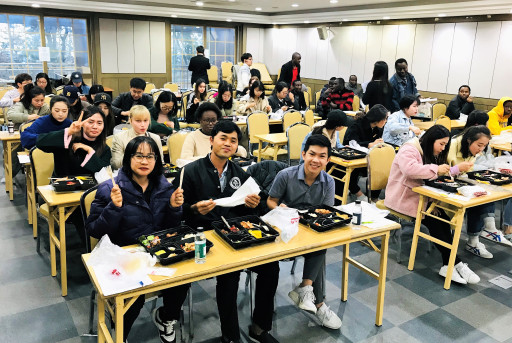 The Department of International Cooperation, Dean Park Sin-Hyeon, held an orientation session for foreign students at 5 p.m. on March 7 at Kim Hyun-Tae Hall in Shalom, sponsored by Jang Won-Beom, the Representative of DongYang ENG Co.

A total of 50 foreign students were attended the orientation, and it started with the prayer of Caleb, an Ugandan student who is in M.Div program. The dean of the Department of International Cooperation Park Sin-Hyun, gave a message of encouragement, gave guidance for life in school and welcomed the freshmen. In addition, Police Officer Lee Doo-Won from Yongdo Police Station, conducted a 'Crime Prevention Class' as a special lecture and gave guidance on safety and crime prevention to the students.

Esther Thang, majoring in Global Business in undergrad, thanked for the valuable support of the sponsor and said “It is good to be able to attend various orientation sessions every semester, to share various information, and to get academic schedules and useful information before the semester begins. I would be very busy during the semester, but I hope to make many memories by participating in various events held at school.”