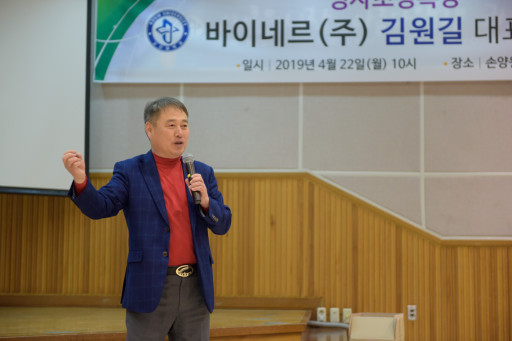 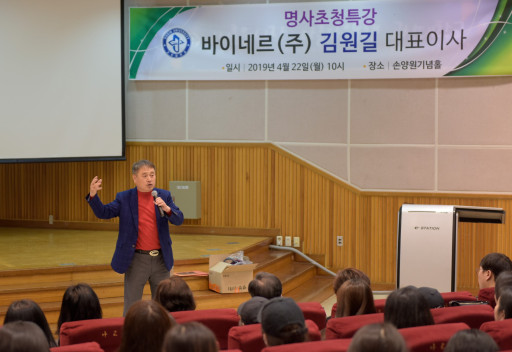 Emphasizes the life that everyone lives together,

not the life for oneself

Kosin University, President Ahn Min, invited the CEO of Vainer Kim Won Gil, who only graduated from middle school, started from a shoemaker and succeeded to became the CEO of the No.1 shoe making company in Korea. He gave a lecture with the title of “It is Okay Even If It is Hard.”

The lecture was held on Monday, April 22nd at Son Yang Won Memorial Hall at Yeongdo Campus. The students were eager to listen to the lecture and they were challenged life-wise by meeting the author of “It is Okay Even If It is Hard.”

During the lecture, CEO Kim Won Gil said that “Even though I am a middle school graduate, I became the head of Korea’s No.1 shoe company with a non-stop challenge. So I believe that you can do better than I.” And he addressed to live a life with others, not just for themselves.

After graduating from middle school, he started making shoes at his uncle’s shoe store. Then he established Anthony Shoemaking Company in 1994 and exclusively imported the famous Italian brand Vainer. In 2011, he took over Vainer, and became an entrepreneurs who has now grown into No.1 shoe company in the country.